Ah. I love this place. Pack a picnic here with all the best cheeses and charcuterie, have a little breakfast or lunch on-site, or fill your carry-home bag with goodies from this amazing food shop. I can still taste the sample of a fresh goat cheese I was given while poking around the store. Mmmm.

There are two shops, one in the Haute Marais, the other near the Place Vendome.

I’d lived in Paris for years and years, then went back often for years and years and not once, in all those years, had I visited La Musée de la Chasse et de la Nature in the Marais. It took a raving friend who’d recently been to get me to go to this little jewel box of a museum. It’s the best!

Housed in a wonderful, old hôtel particulier (1655), the museum offers room after beautifully restored room filled with surprises. A taxidermy polar bear welcomes you (everyone takes a picture with him) and other stuffed animals await. There’s a room displaying a rifle collection (some of them are truly beautiful), a small video screen in a dark alcove of a white unicorn in the rain, and antiques chairs made with antlers. It’s eclectic and fabulous.

There are often super-interesting exhibitions by contemporary artists here. The most memorable show for me was when Sophie Calle took over the place. Click on this link for an article about it as well as some images.

Walk out of the building, turn right, and stroll into the Marais. Unlike much of Paris that was razed by master architect Baron Haussmann, working at the direction of Napoleon III in the mid-1800s, the Marais is still an area of narrow, curving streets and very old buildings. It’s easy to get lost here in Old Paris.

Hotels Particuliers and the Museums inside some of Them

The area is dotted with beautiful hotels particuliers, or mansions, once owned by nobility (this was the chic part of town until the Revolution). Many of them now house museums, including the Musée Carnavalet, which is dedicated to the history of Paris (closed until the end of 2019); Musée Picasso; and Musée Cognacq-Jay, which shares the personal collection of the founders of La Samaritaine department store. (There are signs at most intersections pointing you in the right direction to these places.)

My favorite museum, the Musée de la Chasse et de la Nature, is in the Marais. You’ll love it, too. Everything about the history of hunting and enjoyment of nature, housed in a beautiful, old mansion. (I love the ironwork throughout.) They often have special exhibitions, too, of work by contemporary artists. The Sophie Calle show was amazing.

Jews had been living in the Marais (and throughout France) since the Middle Ages but were expelled by Charles VI in 1392. After the Revolution, when the Jews were emancipated, they returned to the area and to Rue des Rosiers, in particular. Now the center of the Jewish quarter, it’s also home to the famous falafel restuarant, L’As du Fallafel (34, rue des Rosiers). If you’re wondering what all the fuss is about falafel, lunch here might help you understand. There are some famous Jewish landmarks, synagogues, bookshops, and boulangeries, as well as the Museum of Jewish Art and History.

The Haut Marais, or the Upper Marais, is hopping now, with shops and restaurants popping up in the last several years. You’ve surely heard of Merci, the “concept store” that gives back all of its profit to charities (111 Blvd Beaumarchais). Just down the street, though, is a place I like better: Maison Plisson (93 Blvd Beaumarchais), a curated food shop with all the best of the best. Also fun is the Marché des Enfants Rouges, a food market at 39 rue de Bretagne, with prepared foods you can have for lunch or a snack. More and more shops are moving in here…

Most of the French designers have shops in the Marais and Haut Marais, ranging from the tiny Jamin Puech for unique purses to Gucci and Chanel. Oh, and there’s the famous Bazaar de l’Hotel de Ville, always called le BHV (pronounced le bay-ash-vay). It’s particularly fun (in my opinion, anyway) to poke around on the basement floor where you’ll find a zillion different kinds of nails, paints, sandpaper, and other home-improvement items. But there are floors of clothing, shoes, housewares, and food, too. At the top of the building is a bar with great views.

The Place des Vosges, the city’s oldest planned square (1612), is surrounded by beautiful brick buildings and arcades that house art galleries, restaurants, and shops. It was home to nobility. Victor Hugo lived here, too, and his apartment has been turned into a museum. On a sunny day, join locals hanging out on the lawns surrounding the statue of Louis XIII on horseback. Ma Bourgogne (19 Place des Vosges) is a nice spot for a cozy dinner.

No website for this ancient classic. Foie gras and roast chicken. Reservations necessary. $$$$

Very nice, right around the corner from the apartment. Reservations necessary. $$$$

Do you remember the Mexican place, Le Studio, from the 1980s? This is what’s there now. Dine in the courtyard if the weather is nice. Reservations are best. $$$

A casual place around the corner from the apartment that never fails to please. $

A corner bistro (literally) with high standards. Reservations are best. $$

This museum, in a wing of the Louvre, has an impressive permanent collection of decorative arts dating back to the Middle Ages. You’ll also find examples of the most iconic pieces of contemporary furniture and design objects. Closed Mondays.

Of course. It’s not the first museum on my list, but there’s no denying it’s worthy of a visit. Closed Tuesdays.

The building, home of the culture ministry and a former royal palace, wraps around the Daniel Buren black-and-white pillars one of my favorite formal gardens in Paris. Under the arcades are some great shops including Didier Ludot, one of the finest second-hand stores, and Epice, a spot for fabulous scarves. Peer into the window at Le Grand Véfour, one of the most beautiful restaurants in the city. If the weather is good, have lunch in the garden at one of the little tea houses there.

Lovely place for a stroll.

Glamorous restaurant in this chic hotel.

In the Musée des Arts Décoratifs, this is the perfect place to stop for a chic lunch. If the weather is nice, sit on the terrace in the Tuileries garden.

In Les Halles, this restaurant serves up perfect classics to a chic crowd.

On the rue des Pyramides, across from the Tuileries, you can stop in for a pastry at Sébastien Gaudard. Delectable!

When speaking of the poulet de Bresse, the gastronome Jean Anthelme Brillat-Savarin is said to have pronounced it “the queen of poultry, the poultry of kings.”

Raised in a defined area in eastern France, the poulet de Bresse is a white-feathered chicken with blue feet that roams free-range for at least four months and is encouraged to forage for insects. Before their demise, they’re fattened up with a diet of maize and milk. The process reveals itself in the meat’s rich, delicate flavor. 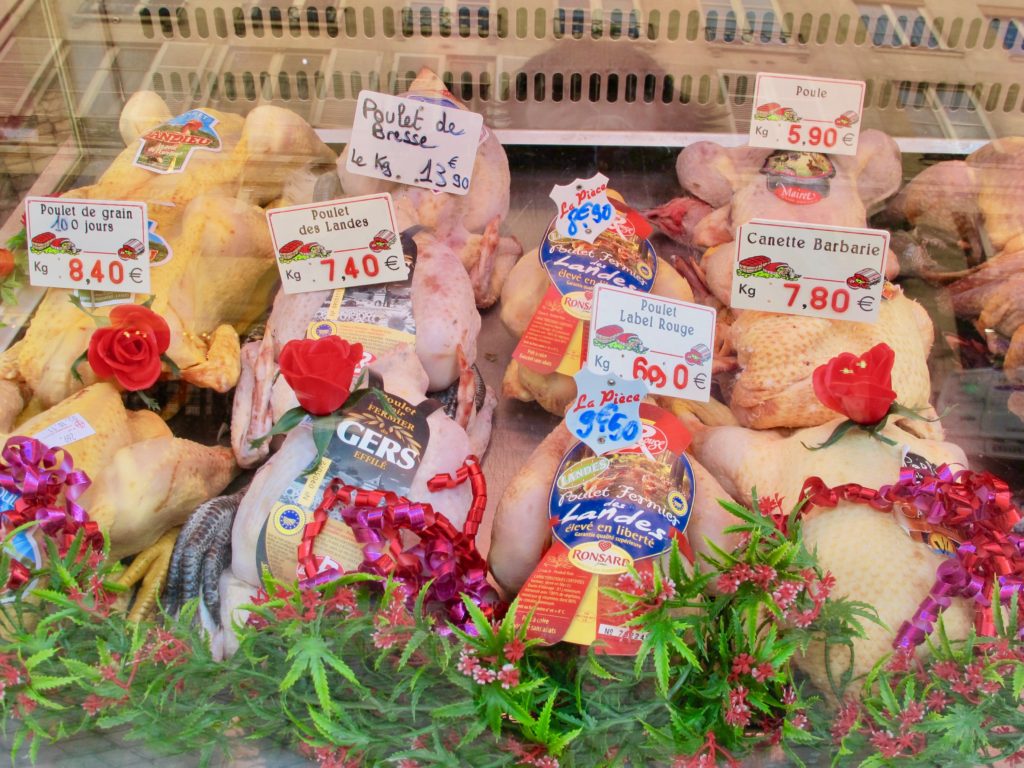 You might note that the poulet de Bresse is almost twice as expensive as the other birds. It might be an everyday bird for kings and queens, but it’s a special treat for us commoners.

I always kick off my stay with a stroll across the Seine to Boulevard Saint Germain where I sit down and order a nice, cold glass of Champagne at Café de Flore. The café was–and still is–the watering hole of literary types, but it attracts everyone: elegant locals, fashion folk, and tourists. People watching from the terrace is a local pastime.

Don’t let the prices scare you away (a Perrier costs about $7 and a club sandwich will set you back about $25). An afternoon on the terrace offers some of the best entertainment Paris has to offer.

The most beautiful fruit, changing according to season, dresses up the facades of these little shops that sell the basics–toothpaste, bottles of water, pasta, wine. Just don’t touch those peaches. Always ask the shopkeeper for help or you risk a dressing down.

Drop into the shop with the red awning with orange-yellow lettering when you want to pick up a fine bottle of wine, champagne, or spirits. Prices are good, there are outposts throughout the city, and while the selection is a bit obvious to locals, visitors are sure to discover a well-priced, new favorite here. 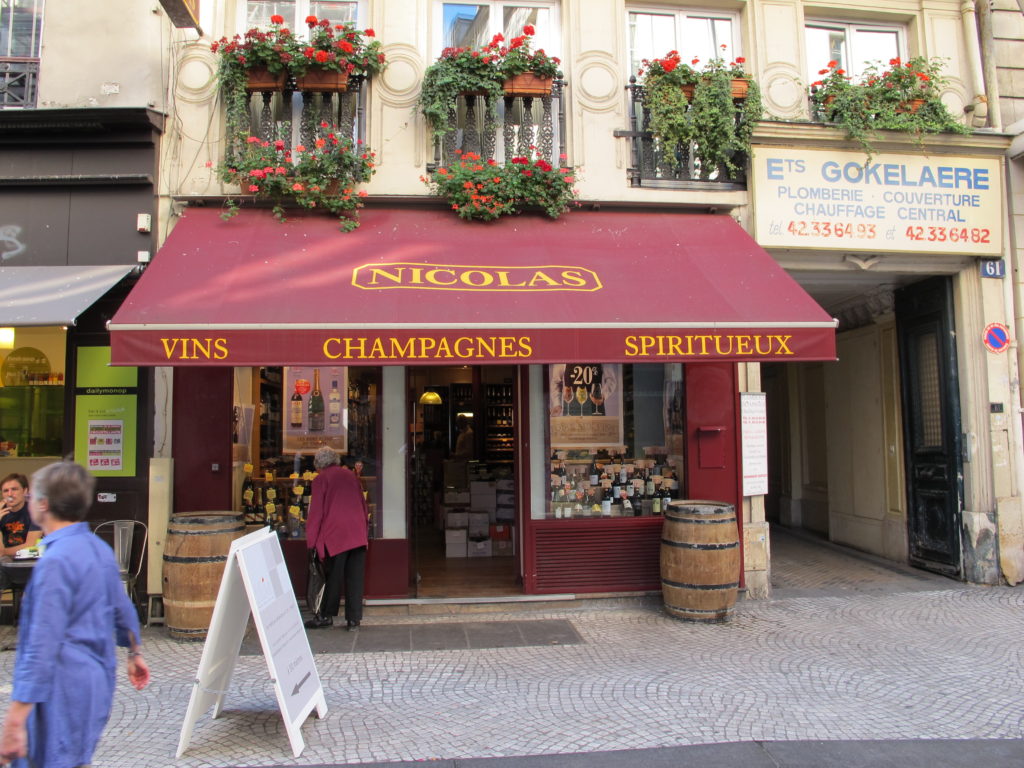 On a hot, summer afternoon in Paris, nothing beats this refreshing green drink. No kale, just mint syrup and Perrier. Aaaah! 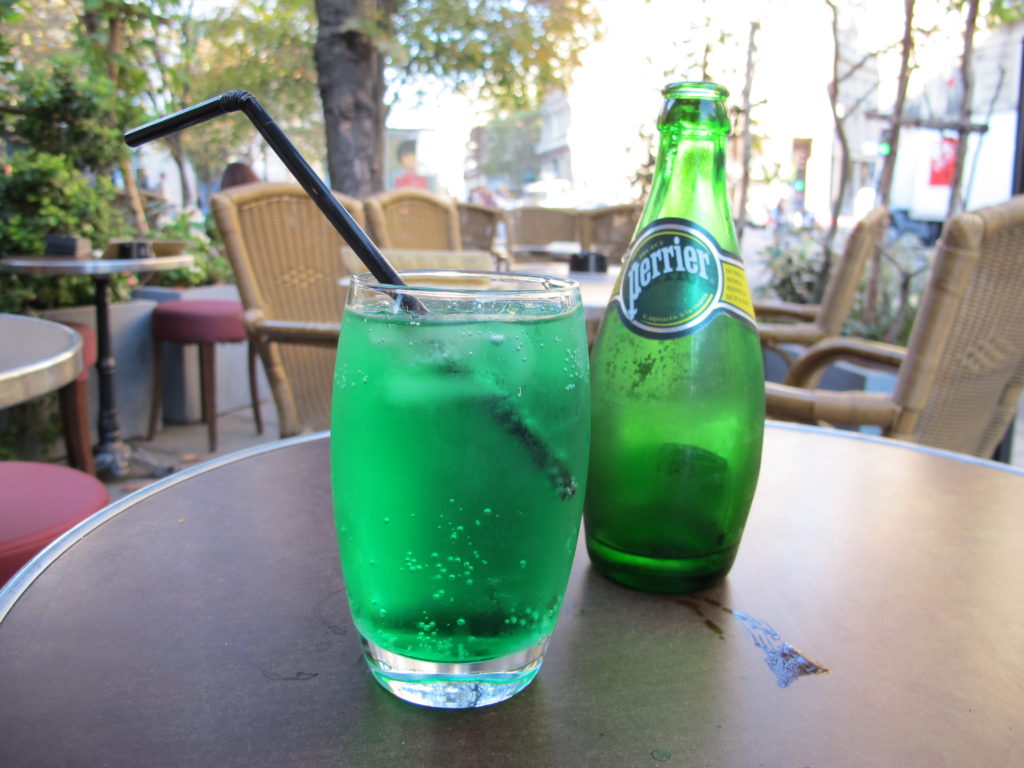